It was very cold when I awoke this morning. Frost was on the ground. The temperature was around freezing. It had been a clear night and it was a crisp clear start to the day. If the clouds stayed away, it was going to be a great riding day.

I was hoping it was going to be like this today – I had seen the forecast last night and it seemed that finally, the rain would stay away and the sun would make an appearance. 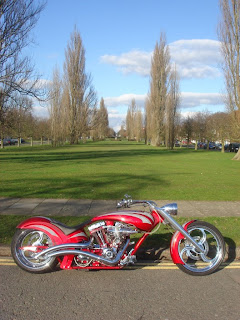 It was with some degree of anticipation that I watched the skies stay clear and the thermometer slowly rise. Today, I would take out my custom bike for its first riding outing this year! The twin-carbed engine doesn’t like the cold damp air. I had made sure yesterday that the battery was fully charged. Being 110 cubic inches or 1800cc, whichever way you prefer to look at it, that sized engine groans a bit as the small starter motor struggles to turn the engine over. If my bike was a woman, she definitely wouldn’t like the cold weather and would want to move nearer the equator.

So, I used the choke, turned on the fuel, held my breath and hit the starter button. There was life there, but not as we know it. I gave it another burst of starter. After a short while, the engine fired and I was happy. My neighbours probably weren’t happy with the noise while I let the engine run for a while to get it warmed up a little. To me, the bike sounds fantastic with its low down, loud, typically Harley sounding engine with straight through pipes. It sounds even better when the bike is in the garage and the noise reverberates around the still crisp air. To me it sounds good – I suspect to some others, not so good. 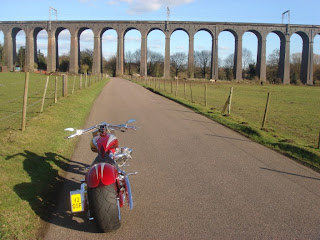 It was one of those rides where you don’t care where you go, as just the ride itself was what mattered. I didn’t have a destination in mind, nor any idea of a route to take. My first decision was challenging - should I turn left out of my drive, or right? Who cares? I chose left. My ride was only about 30 miles. Living as I do just north of the great metropolis that is London, it takes a while to get out of the built-up areas and onto slightly faster roads, so I was happy just riding around the area that I live.

I went to a nearby large town, to deliver a faulty watch to a jewellery store to be repaired. There was a small group of people looking at my bike as I returned to it, including an elderly couple who must have been in their eighties. “You need a young blonde haired girl sitting on that” said the old lady pointing to my bike. I couldn’t help but smile as she prodded me with questions about my bike. After 10 minutes we said farewell and I continued my journey, feeling better for having met the elderly couple.

After riding a while I remembered I had slipped my camera in my pocket so I began to look for places to take a photo or two of my bike. I suddenly thought of Digswell Viaduct which carries the East Coast Main Line trains over the River Mimram on their journey the length of the country. At 1,560 feet (475 m) long and 100 ft (30 m) high it makes a pretty impressive backdrop. 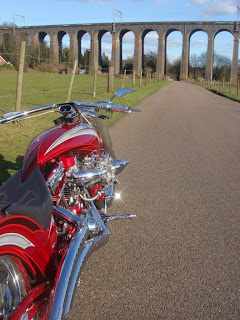 The viaduct was opened by Queen Victoria in August 1850. It is said that she was so worried about the height of the structure that the train carrying her had to stop short of the viaduct and she continued her journey at ground level along the length of the viaduct. She then re-entered her train at the other side.

The viaduct is one of the narrowest parts of this important train line as it can only accommodate two tracks while the rest of the route is four tracks. As can be imagined, the structure is a bottleneck on the route causing trains to have to slow down to fit on the two track part across the structure.

I have travelled on trains may times over this structure and the view is excellent. I must try to remember to take some more photos of it with the bike when I have more time. I needed to get riding again as the temperature was beginning to drop sharply. Soon I was home with my hands around a warming cup of tea!

The forecast for tomorrow is good as well. Perhaps spring has sprung at last.....
Posted by Gary France

Good on you! I spent sometime re-connecting the batteries and polishing the bikes after their run down the hill at Ally pally. I then took Othello for its inaugural ride - a mere 5 miles, but very satisfying and boy is it LOUD!
Tomorrow I will be taking it into town to the photographers for a pro-studio session.