Yesterday was a great day

I took part in the Afghan Heroes bike ride through Wootton Bassett.

I was one out of 15,000 people on 10,000 motorbikes to show our support for the British Soldiers who have given their lives fighting in Afghanistan and to also say thank you to the people of Wootton Bassett.

Click on the picture below for an amazing view of riders and the crowds! 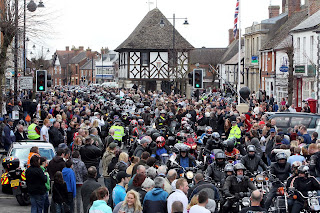 I left home early on a cold crisp Mother’s Day morning. Some things are just impossible....being 07:45 on a Sunday morning, I tried to start my Harley-Davidson as quietly as I could. I live in a sleepy village and I hit the starter button softly, but it did no good. The engine roared into life and the noise no doubt entered my neighbour’s bedrooms! I started my ride as quietly as I could....

Soon the open road beckoned and I had 120 miles to ride to get there. I was meeting Clive and Janice about 30 miles into the journey and there they were, just where they said they would be, on time. I first met them on an organised ride we took along with about 20 others to Faaker See in Austria. 2 years ago, riding over the Alps with them was cold at the time and it was cold yesterday morning as well.

Soon we headed out together and after an hour or so of riding, we needed sustenance – Clive soon found a cafe and we ate a hearty breakfast to prepare us for the remainder of the ride. Martin and Christine joined us on their Harley at the cafe. We left, suitably replenished for the remainder of our journey.

As we got nearer, we could tell that the event was going to be large. More and more bikes shared the roads with us and soon we arrived at Hullavington Airfield, a Ministry of Defence facility previously used by the Royal Air Force. The airfield was being used as the gathering point for the riders taking part in the ride. The organisers needed to find somewhere large enough locally that could take 10,000 motorbikes and the airfield was ideal. Luckily, the weather was good all day, so the impossible task of finding shelter from the rain at a vast open area was not necessary.

The video clip below starts with us arriving at Hullavington Airfield and finishes just before the ride got to Wootton Bassett. Even before we arrived at Wootton Bassett, the event was taking on a special meaning. The route from the airfield to the town goes through a rural area with mainly fields and trees to be seen. The route also passed through a number of small villages and many locals stood by the side of the road, waved at the riders, cheered and clapped.

One lady in particular stood out for me. She was very elderly and in a wheelchair. Next to her was a nurse and it looked like they had come out from a nursing home to wave to the riders. The old lady had a huge smile on her face as she waved a small flag. The fact that she had come out to wave us through showed the spirit of the day – very patriotic and dare I say, quite moving. I might try to work the name of the nursing home and write to her to say thank you.

Wootton Bassett is becoming well known in the UK. Soldiers that are killed in Afghanistan are flown back to the UK in military aircraft that land at the nearby RAF Lyneham. The route they then take to the coroner’s office passes through Wootton Bassett and the people that live and work in this small rural town stop what they are doing to line the streets to pay their personal respects to the soldiers as they pass. The town has become the unofficial centre of public mourning for the soldiers. As such the town has rightly been taken into the hearts of many in the UK, with news footage being regularly shown of soldiers’ funeral cortèges, their mourning families and the people of Wootton Bassett standing to honour the fallen servicemen and women.

Three months ago, eighteen year old Elizabeth Stevens had the idea of a small bike ride on Mother’s Day and posted something on Facebook about it. She let 15 friends know and the idea gained momentum. Soon it became a huge event and the police, the local council and the MOD helped in its organisation. Elizabeth remained involved throughout and yesterday rode on the back of her partners Harley-Davidson Sportster.

Riding through the town itself was a treat. I didn’t know what the reaction to 10,000 bikes riding through a small town would be. After all, it was Mother’s Day and people would no doubt be inconvenienced by the inevitable traffic increase. I was very surprised.

What a great day.

The video below is far better than the one I shot of riding through the town itself, as it shows the event from the public perspective. I would much rather that you watched that.

To the people of Wootton Bassett, thank you. Most of all, to our fallen soldiers, our gratitude can never be expressed well enough for what you have given. Rest in peace.

Gary,
Great post. The people of Wootton Bassett do themselves proud. We've even heard of them over here! These sorts of tributes are often all that we can do to say thank you to those who have lost their lives on our behalf - and it seems so inadequate. Glad you could make the ride and share in it.
On another note, the video images are great. I do have to get one of those cameras before the riding season begins here (another month).

Yes, your video is just excellent. Glad you managed to get all the bits in time. The best thing about the camera is it's stealth mode. No one even knows you are "filming" . I think I'm getting used to the left side now.

Well done - I feel bad for not joining you! - But the video work is superb, you will win an Oscar by the time you get back from the US - with a few Terrabytes of film!

Canajun - Thanks. It is amazing to think that a small town like WB has become so well known. I think you are right, in that there is very little we can do but support those fighting for us and to honour those that have fallen. All very sad.

I can recommend this camera to anyone. It is a winner.

Bob - It was touch-and-go but the parts made it and they were worth the wait. Stealth is the right word, in fact people look at the camera and ask what it is! You will be very used to driving on the left by the time you come over and visit!

Ian - you missed a great day, but Mothers Day is important as well. As for the Oscar, I won't write my acceptance speech just yet....

Thanks for doing your part. Thanks for the ride! That definately hit the spot. I gotta say now all I can do is dream about that damned camera.

Dave - getting the front of my bike in the shot is something I will always do now. Then, watching the clips back almost makes it seem like you are riding the bike. Sorry about the dreaming....

Great post. It must have been something to see and hear that many bikes in one place!

What an awesome post! Excellent videography. I enjoyed looking over your left shoulder the entire way!

I do have one cool recommendation: where you hear the music coming from the Ultra Classic, as you walk past, then back and up to your bike, fade-in the real music soundtrack and have that carry you for the beginning of the ride! How cool would that be!

Radar - Thanks. You have to be really careful using music - it is copyrighted and so taking someone’s music and using it on your own video mustn't be done. It would have been a good idea though! It was great taking part in the ride. I hear they are going to make it an annual event.