On the recommendation of a fellow blogger and keen biker, Ian Solley of & Ages Custom Motorcycles, I contacted a guy called Nigel of the Clean Bike Clinic, to discuss having him do a deep clean of my bikes.

Yesterday, Nigel arrived at my house and spent the day cleaning my red bike and I have to say, he did a fantastic job.

Now, I am a person that wants to keep my bikes clean. Dirt on my bikes is just not on the agenda, so when Nigel arrived yesterday almost the first words he spoke after seeing my bike were “Exactly what part of your bike do you think needs to be cleaned?” Meaning it is almost spotless already, but I was on a mission....

I have had my red bike for two and a half years and if you own a bike, you will know that after about that amount of time, it begins to fade and lose its sparkle. Mine was beginning to lose it. Like many who believe in riding their custom bikes to the full, I have put a lot of miles on mine and it was just starting to show. The paint was not a shiny as it once was and the aluminium forks definitely needed some TLC. Hence my call to Nigel – I needed somebody to do what I could not – bring it back to its original pristine condition.

Well, he did that, and some.

Nigel worked on the bike all day. It takes that long. The results are well worth it. The sparkle returned.

If your bike needs to be brought back to its sparkle, contact Nigel through his website. He is based near Gatwick Airport in the South East of England.

Here are some photos of Nigel at work and of the finished sparkle.... 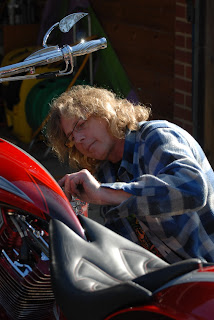 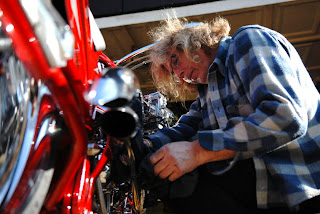 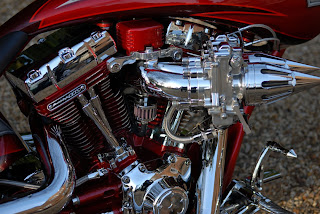 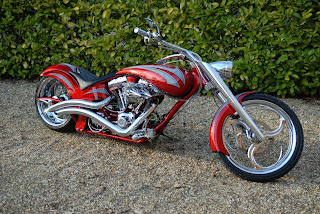 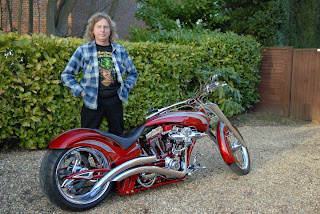 This comment has nothing to do with the clean bike clinic, though I must say that's a pretty pretty (rather pretty?) bike. Thank you for the nice comment on my blog, http://MushroomstoMotorcycles.com. Y'know, Delaware isn't all that far from your planned route. Why don't you bop down here and pay a visit? Lunch on me, and a bed depending on your schedule and the time of day. I might manage to round up a few companions to ride with you to, say, the Conowingo Dam, if you'd enjoy the company. This scenic spot would be on your route back to your route, so to speak. I see we both read Chris' blog; be sure to check out Jack Riepe's Twisted Roads listed on both Chris' and my blogs.

Well done Nigel - I admire a man of patience as I have so little and its why my bikes are grubby - until Nigel sorts them!

Wow, there's a man with far more patience than I have. I keep my bikes clean but I don't expect to be able to wipe a white glove on any surface and have it unmarked.

It is amazing what patience and the right mix of cleaning materials will do. I have never done that to my bikes... ever. They got cleaned alright but never got the bling-bling that your two-wheeler received. Well done, Nigel.

Rogers George - Coming down to Delaware sounds like fun, but I am going to be pretty tight for time going south into NYC and then heading straight back out north again into Vermont as I head for Montreal. Sadly I don't think I will be able to make it, but I am really grateful for the offer. Sorry to hear about the chicks.

Ian - Nigel is good and I am very grateful for your recommendation.

Canajun and Sonja - I normally clean my bikes myself and this is the first time I have used somebody else to help. My intention is to use Nigel occasionally to really do the deep cleaning and waxing and then I will do all of the intermediate cleaning. It was definitely worth it as Nigel achieved what I could not. Ok, I admit it - I like a really clean bike!

I was just talking to a friend over lunch about how I turned a corner somewhere. I used to always be detailing my bikes. Now I just ride and clean once in a while.

With that beautiful custom bike, though, I can see how you would have the urge to show it at it's best. What a ride!

By the way, I answered your question about the tombstone on the post at my site.

I think I have turned a corner too. I used to be big on muscle cars. Everytime I took it out I had to clean it, then when I returned home, I had to clean it again. Then I wondered who owned whom. I still have my sports car which I sort of keep clean and my Wee which is cleaned once in a while. Not deep cleaning, sort of a hose and some soapy water. I do have to clean my black wheels soon. My bike is 99.3% black, nearly no chrome so it's hard to tell if it's clean or not

Gary, I fall into that "once-in-awhile" camp, too. I do enjoy clean, but I'm of the opinion that it never lasts; like dinner dishes. So, when they get really bad I'll bite the bullet and wash them ... I can't imagine you keeping your bike that clean during your upcoming ride, and I do hope that doesn't diminish your riding enjoyment on tour!

Looks great Gary. Soap and a garden hose is the most they have ever gotten. The SV650 was also cleaned by the strongest rain storm I've ever been in just north of Colorado Spring last year.

I'm torn. I love to just ride, and say F' the cleaning, but my bike is custom and screams nasty things to me when its dirty. It aint as perty as your though, and never quite as clean either.

Irondad - I too used to clean my bikes a lot, but I not so much now. Soap and water plus a little bit of polish and that’s my lot. I do like a clean bike, but I don't have the patience, hence getting Nigel to do mine. You are right - it would be a shame to let my red bike fade through not keeping it clean. I saw the headstone reply - I will use that website!

Bob - that’s the problem with chrome - lots of polishing. My cars are filthy dirty! My black H-D Road King only gets the once over treatment occasionally. I do use an air blower to dry the bikes after they have been washed and that saves a huge amount of time. I will try to remember to take a picture of the blower and post that. I have to say the blower is about the best thing I have ever bought that is motorcycle related.

Chuck - you should had seen my black bike after my ride to Austria, it was brown! Honest, I don't mind a dirty bike, but not for too long. On my tour I will probably clean my bike every two weeks.

MM - Torn indeed. The answer to the ride or clean question for me is nearly always to ride. I did a fair bit of riding on the red bike as soon as the snow and frost had (nearly) gone, but being worried about the salt used on the roads, it was time for a really good clean. The waxes that Nigel used will result in the red bike only needing to be washed and dried for a while. No detailing.