This year, the 20th Annual European H.O.G. Rally will be held at the end of May 2011 in Biograd, Croatia. I will be riding there with Ian Solley of 7Ages Custom Motorcycles. I will be on The Leading Ladies and Ian is taking his Richard II bike, a recently restored 1970 FLH Harley-Davidson.

The route we have planned takes us under the English Channel on the Eurotunnel train, down through France via Reims, Troyes and Dijon before skirting around Geneva and riding across the Alps via Megeve, Albertville and Val-d’Isere, then crossing the border into Italy and riding to Turin, Milan, the Stelvio Pass, Venice and Trieste before heading south briefly through Slovenia and down the Adriatic coast to Biograd in Croatia. What a ride that will be! 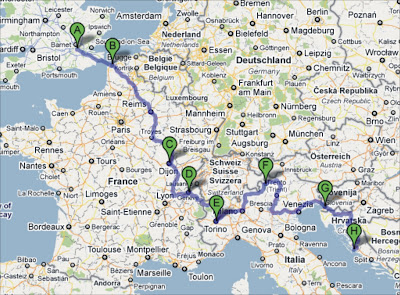 Whether we are able to stick to that route depends on the weather as there could be a considerable amount of snow across the Alps and we may need to divert further south to find a warmer route. If we are able to stay with the planned route, it is about 1500 miles from my house to Biograd in Coatia.

The first day we will stick mainly to motorways in order to get as far south as we can, but after that the next four days will be spent riding smaller roads to take as much advantage as we can of the twisty roads through the mountains and rural areas of France and Italy. Overall, we will take 5 days to do the trip, before spending 3 days at the HOG rally itself in Biograd. Neither Ian or I have been to Croatia before, so we are looking forward to seeing what it is like. The coastline we will be riding down in Croatia is said to be stunning.

This is a picture of Biograd.... 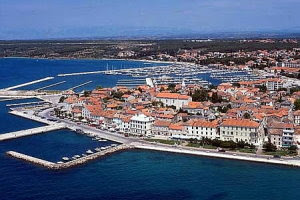 It should be a great trip!
Posted by Gary France

What a wonderful ride. Hope you give us a blow by blow account.
You are obviously feeling much better. That is the better news.

Have a nice time while travelling! I'm waiting for your impressions concerning Groatia.

when you say 5 days to do this trip, do you mean each way (I presume) ? It does look like another cross country adventure and we look forward to your musings and photos

...and the best thing is Gary is totally organising it - plugging the route in his SatNav so I just follow and check into the pre-booked hotels

Road Whore!....your just a road whore Gary. Feels good huh. Now I got something else to look forward to. Can't wait for the virtual run via your e-portal.

looks like a fun trip Gary. I'm sure you manage some stunning pics to show us :)

I will demand a lot of pictures and a book from this trip also. Can you handle that?

I, also, demand a lot of pictures. Stunning pictures!
~Keith

I am SO envious. Have a great trip!

Wow Gary, that's some ride....I envy you your ability to cruise through Europe without first involving an aircraft ride. Oh if I'd only known about how great motorcycling was back when I was stationed there with the US Army.

One more thing Gary, if on the way to Venezia, you happen to cruise by the small town of Grisignano di Zocco, that's where I lived while stationed in Italy.

Cool! Looking forward to reading the next adventure! :)

I can't wait to follow your next adventure. I just got my new bike today; 2011 Road King Classic. I rode it around the neighborhood at lunch time; feels/sounds great. I decided to make this purchase after following your USA trip.

AHD – I hope so. A lot will depend on the weather.

Patti – Yes, I hope to be posting nearly every day. Yes, I am much better thanks.

Bob – We are spending 5 days to ride to Croatia, then a few days there. We would have liked to ride in both directions, but due to time constraints, we are having our bikes shipped back by road to the UK by the people that move the H-D demonstrator ride bikes to the various rallies across Europe. Both Ian and I will fly back.

Dave – I can think of no better way of putting it. Road Whore is right!

Chris – I hope to get some good pictures. If it is snowing in the Alps, can you send some of your cold weather gear?

Jimbo – I will try with the pictures, but another book? No way!

Keith – I will try, I promise!

Canajun – Thanks, I am sure it will be great.

Charlie6 / Dom – That is one of the benefits of living in Europe – there are so many different countries and cultures just a few days ride away. I just looked on my maps and we are riding through the town of Grisignano di Zocco – we will be right there!

bluekat – I hope to be able to post something each day from the ride.

John from Holland, MI – Congratulations of your new bike!! It certainly is a fantastic feeling to ride a new bike for the first time. I am so pleased that you bought your bike after following my USA trip and I hope you get as much pleasure from your Road King Classic as I got from mine!