Goosenecks are so wide ....

In researching places to visit on my tour, I found a photo of Goosenecks State Park and I think I said wow as I looked at the picture.

Goosenecks State Park is all about one thing – the deep meanders of the San Juan river. Millions of years ago the land slowly rose and the river cut a remarkable chasm into the rock, forming an incredible series of curving meanders. I had to include this on my tour, but I was already worried about being able to take such a spectacular looking photo as this with my regular 17-55mm lens. 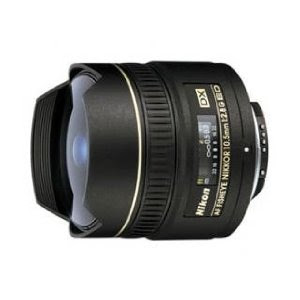 I had a hankering for a new gadget, so last week I jumped on the train to Central London and purchased myself a new lens – a fisheye! This goes by the snappy name of the .... Nikon 10.5MM F2.8G AF DX IF-ED FISHEYE-NIKKOR. It sort of trips off the tongue, doesn’t it!

It is a spectacular lens and I had to try it straight away. Here are a few test shots.... I can’t wait to use it on the tour..... 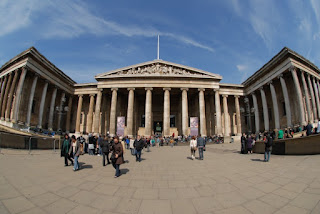 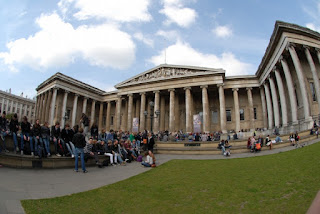 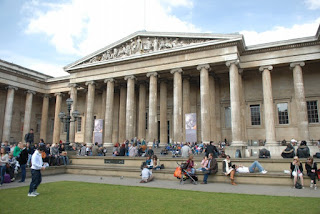 The same shot, but taken with a standard lens 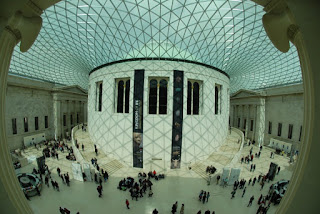 The interior of the British Museum. The roof was built by the firm I helped to run 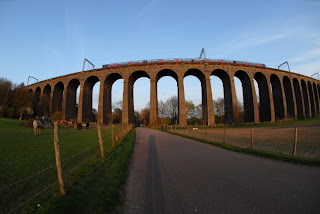 My local railway viaduct, with a train crossing


I think the key with this lens will be not to use it too often.
Posted by Gary France

I had the same problem with taking photos whist in Zion NP. I was travelling light but I brought along my 17mm Nikkor. I thought that I had it all covered, but was greatly mistaken. Because of the narrow slot canyon I could not get "back" far enough to even get the brim of the canyon in view. It was the first time I was stumped. I never took any photos down there as there was no way to capture the magnitude of what I was seeing. I think with the GoProHD 170 degree angle you could do a video Pan. I brought a Sony videocam but it was not wide angle, only about 45mm.
Ever since that trip I now do panoramas by panning videos. I also take sequential photos so one day I would "stitch" them together. I have a few sequences from the Grand Canyon which are on a disk somewhere.
I do have some "film" panos taken with my Noblex 150F, rotating lens camera.

In Utah just north of Moab there is a shot similar to your above photo. I can't recall the name of the place but there is a curve where the river winds around . . . (never mind) I just found it

I just love the Moab area. Next time we will rent the Pink Jeep and go down into the Canyon . Yes, there is really a PINK JEEP, only for those with PINK crocs (LOL)

I found a better picture

Gary - That's a great lens. I'm envious. I've had my eye on a fisheye (no pun intended) for a long time now. Just need an excuse like a once-in-a-lifetime trip, or a lottery win, to satisfy the urge I guess.

Nice Gary. I think the GoPro 170 has bitten you! The interior is a nice shot, but very round. Would look good on a plate. lol.

I've been on a pink jeep tour. They do exist, and I don't even own pink crocs!

Bob – I have been experiencing that “I can’t get back far enough” issue for some time, so I had to do something about it before the USA tour starts. I think you hit the nail on the head when you said that you didn’t take some pictures because you couldn’t capture the magnitude of it – that would be such a shame when something is so worthwhile. Hence the need to buy the fisheye.

I tend to stick to my Nikon for stills and my GoPro for videos. I think I will use the GoPro off the camera at times – not sure about that but I imagine it will be hard to resist. I am taking the GoPro for another ride through London on Thursday so I may try it.

Deadhorse SP is on my list of places to go, so seeing the pictures you link to makes me even more certain the fisheye will be a good investment.

A pink jeep indeed! Why am I not surprised that you would look forward to renting a pink jeep!

Canajun – Sorry about the invidiousness. I am sure I wouldn’t have bought it save for the trip.

Chris – The GoPro did show me what a wide lens could do, but I haven’t been tempted to use it as a still camera. Maybe I should go into the plate printing business (if there is such a thing?). Ah, so Mr Scoot talks with forked tongue! You can go without the Pink Crocs!

Ian – LOL. Never mind, I will bring it on Thursday and have some fun with Macbeth and Tradewinds.

There's also a big river bend site like that in Arizona near the town of Page, AZ. And like everyone else I the lens I had wasn't up to the wide magnificence of the view.

Doug - thanks for that. I have taken a look at it on the web and it is now on my list of things to see! I will be going there, for sure.

10.5mm great lens, specially with the aperture of F2.8. One question: why did you not go for a zoom, like the Nikon AF-S Nikkor 10-24mm 1:3.5-4.5G ED DX? Weight? Quality? I use a older Nikon 12-24mm f4G ED-IF AF-S DX, the F4 is not such a issue, sometimes I could need a 10mm, but often I am happy to be able to reduce distortion by zooming to 24mm.
This said, I am really looking forward to your illustrated reports starting July.

Roadkinguk – My normal lens that is nearly always on the camera is a Nikkor 17-55mm 1:2.8 so I have a zoom that I am happy with. For the fisheye, I liked the big aperture, the light weight and it is very small, which is good for a long road trip. Plus, they had it in the shop I was at!

Thanks, understand, 55mm were not enough for me, thats why I went for the 24-120. But the 17-55 is much better in quality.
PS: managed to reactivate my Blogger account, so I do not show up as roadkinguk, but Bleiglass, my nick. Lets see how it works :)