Top Purchases for your Motorcycling.

On both Twitter and on my blog, I asked a simple question. “What is the single best thing you ever bought for your motorcycling?”

The results are very interesting.

By far the most popular single item was heated grips, and by a considerable margin. You voted this the best item by a factor of three over anything else. I suppose this could reflect the geography of the people that answered in that most live in countries that have a colder winter. It is however surprising that more manufacturers don’t offer their own brand of heated grips, but rely instead on after-market suppliers. 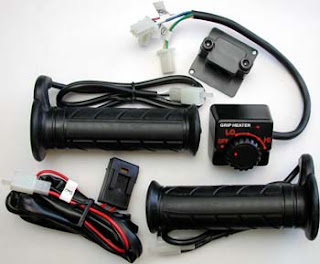 Running in second place for the most bought item was a music system / speakers for motorcycles. Again, not surprising, as so few motorcycle models have these as an option. A lot of riders do like to listen to music while on the road, so again, perhaps this is an omission the manufacturers need to address. 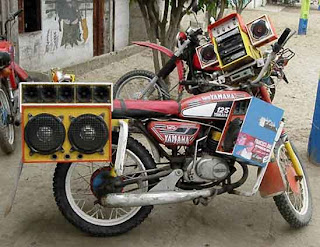 As a surprise, in third place was after-market exhaust pipes. I didn’t see that one coming, but in hindsight, we all do see a lot of motorcycles with non-standard pipes. I suppose it is the one item most changed on some brands, especially Harley-Davidson, whose owners like the distinct noise that come with different pipes. Harley-Davidson themselves no longer sell these types of pipes that increase power and noise and I should think they regret having to stay within certain environmental criteria with their standard machines and parts. They are certainly missing out on a huge market. Many sports bike riders also like to improve performance by using race-can type exhausts. 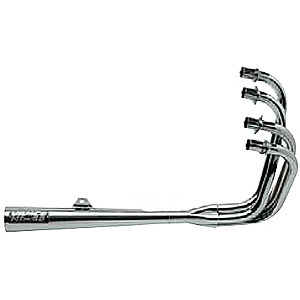 Seen as a whole, it is accessories FOR THE RIDER that forms the largest group of purchases, with protective clothing, raingear, boots, helmets, special sunglasses, heated jackets and custom molded earplugs that some people consider are the best things they have bought for their motorcycling. We all need these types of item, but a lot of riders singled out one of these as the BEST thing they had bought.

The next largest group of items riders thought were the best purchase was accessories for their motorcycle themselves. The list of answers is below, in no particular order.....

I’d like to mention just three of these. Better headlight bulbs. Hello manufacturers, are you listening? It s a pretty poor show that riders feel the need to have to go out and buy these at all. Almost all of the bikes I have owned have had poor headlights and it seems in common with others, I too have felt the need to improve the lighting. It is a terrible state of affairs that some riders think the BEST thing they have ever purchased for their motorcycling is better headlight bulbs.

Many riders suffer from an aching throttle hand due to having to hold the throttle on their bikes at an almost fixed position, especially on long rides on open roads. Most riders suffer from this, but few motorcycle manufacturers do anything about it. Some larger bikes have cruise control and riders seem to fall into the category of loving this, or thinking it is a joke. My main touring bike, a Harley-Davidson Road King, has electronic cruise control and it is wonderful, but at the same time, I wouldn’t need it if I was commuting shorter distances. Any journey that has you in the saddle for most of the day really does need some form of throttle control, even if that just gives a few second rest and the opportunity to move your wrist around.

A final drive chain, used to transfer power from the engine to the rear wheel of a motorcycle is, well let’s admit it, pretty ridiculous. You have a critical moving part on your vehicle that needs regular adjustment and lubrication, that if not done properly can be very dangerous. Just imagine if car manufacturers did that. Even worse, riders having to resort to buying an external lubrication system such as a Scottoiler, shows what a crazy situation this is. Surely motorcycle manufacturers can come up with an in-built system to keep a part lubricated!

The remainder of the list of best buys shown above are almost all personal choices to match the style of riding that the respondents do, but perhaps the louder horn and better brake lights are also things the manufacturers should have got right in the first place.

One type of response really impressed me. Some people said their best buys were about how to improve their motorcycling in general. A motorcycle safety course stuck out as a really good response and to think that this is the best thing a some people ever bought for their motorcycling is impressive. Books about roads to ride show a hunger by some to find better riding and waterproof road maps, as selected by one rider, showed a willingness to ride in all weathers.

Of course, no survey would be complete with at least a few jokers. These responses made me laugh – a motorcycle, gasoline and a solo seat!

Okay, this wasn’t a huge survey, but it was responded to by a good number of people, so I assume it fairly reflects motorcycling. My overall conclusions from the responses are....

What is the single best thing you ever bought for your motorcycling?

I am interested to discover what items bikers have bought for their motorcycling.

If you had to name one item as the single best thing you ever bought for your motorcycling, what would it be?

I will collate and write about the answers. 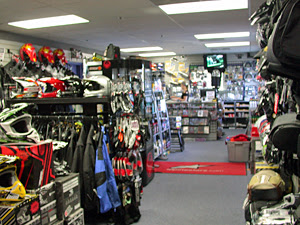 Taken by a friend of his, this is my eldest son, Charlie, smoking the rear wheel of his Sportster.  I love this picture!

No, I cannot condone this, but there is a little bit of rebel in us all...... 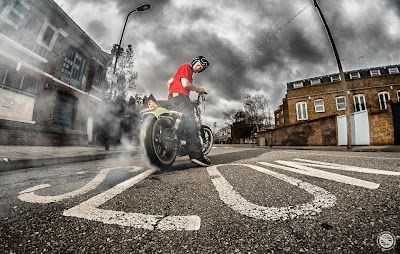 The most dangerous risk of all..... 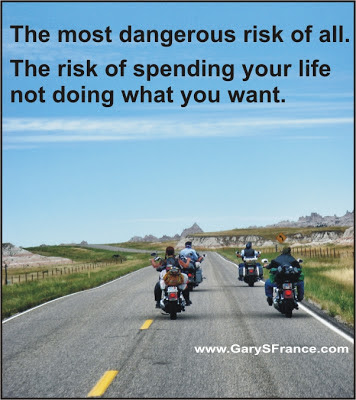 
I was 13 years old when I first saw Barry Sheene race motorcycles. It was at Brands Hatch in 1979. At that time, at just 20 years old, Barry was an extremely talented and likeable guy who made quite an impression on me. I watched him race dozens of times and he soon became my hero.

That year, he won the British 125cc championship, which signalled the start of a very impressive racing career. 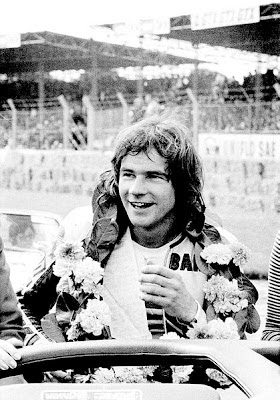 I would travel all round the UK to racing circuits such as Brands, Mallory Park, Cadwell, and Oulton Park to watch the racing. I couldn’t afford the tickets for the World Championship rounds in the UK, so I concentrated on the British Championships and the Transatlantic Trophy series, which pitched the best British riders against the best of the American team.

I remember riders such as Mick Grant, Peter Williams, Steve Parrish and others, but it was Barry Sheene who always stood out for me. The rivalry and races between the two nations teams was legendary and I got to see Americans such as Kenny Roberts and Randy Mamola battle it out in some fantastically exciting races.

Sometimes, I would be lucky enough to walk around the pits and talk to the riders. Barry was always cheerful and smiling and I liked him a lot. Despite his growing fame, he would always try to take time to share a moment or two with his fans.

Famously, Barry had a spectacular crash in 1975 in practice at Daytona. At 175 mph, his rear wheel locked and he broke his left thigh, right arm, collarbone and two ribs. His hero status was elevated even more in my mind when he was racing again just seven weeks later.

Barry went on to win the 500cc World Championship in 1976 and 1977. He certainly lived life to the full and gained (earned) a playboy reputation. A true sporting legend, he mainly raced Suzuki’s and Yamaha’s. It was no co-incidence that I soon owned a bike by each of these manufacturers.

This short video gives a glimpse of the man.

Barry died of cancer ten years ago today at the age of just 52. That was way too young for someone who gave so much, was so talented and so loved by many.

My book about touring the USA on my motorcycle is launched!

Today sees the launch of my book about riding my Harley-Davidson motorcycle around the USA.

Called ‘France In America’ the book describes the journey I took, covering 21,475 miles, in 27 states, in four and a half months.

I was so impressed by America and the people I met, I wanted to record the journey in some way and a book seemed the obvious answer. Having now written that book, I can only hope I did justice to a wonderful country.

To coincide with today’s launch of my book, a short video has been made to explain some of the background to the trip. Please feel free to embed this video in whatever website or blog you wish....

Monthy Python. The only type of Spam I like.

There have been many posts and comments about spam recently.

There is only one type of spam I like - the Monty Python version.

I raise I glass to this type of spam.... does anyone remember this....