A great day on the Bonneville Salt Flats.


A few months ago, I met motorcycle TV presenter Henry Cole at a motorcycle event in London.

“It is your fault I stayed at the Madonna Inn in California” were my opening words to him. A broad smile appeared on his face, as he clearly understood what I meant. Sort of kindred spirits, we seemed to hit it off, as we share a passion for long-distance motorcycle touring on custom motorcycles.

When I was planning my long motorcycle tour of the USA, I bought a series of videos of one of the TV series’ that Henry had made. Called ‘The World’s Greatest Motorcycle Rides’ these showed him riding some terrific roads in the USA on a motorcycle. I used one or two for ideas about where to ride for my own trip and this included staying at the Madonna Inn in California, hence my introductory words to Henry.

At that bike event in London when I met him, Henry mentioned he was going to go to the BUB Motorcycle Speed Trials on the Bonneville Salt Flats in August to ride a Brough Superior and to make a television programme about the racing. We compared dates and it soon became clear I would be nearby, at the end of a road trip around Colorado with Jackie and her family. “Why not come and join us on the salt?” asked Henry. Why not indeed. I had wanted to go to Bonneville for a long time, so flights were changed and a plan was hatched.

Having completed that Colorado road trip, a few days ago, Jackie and I caught a plane to Salt Lake City and we drove out to the town of Wendover, on the Utah / Nevada state line close to the Bonneville Speedway, and checked into a tacky hotel in this very strange town.

It wasn’t long before we headed out onto the salt flats and past the sign to the legendary place where so many land speed records have been set. 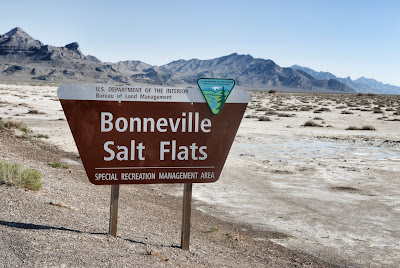 Driving on the salt immediately made the hairs on the back of my neck stand up. There is something about the place that evokes a feeling that great things had happened here. In 1960, Donald Campbell ran (and crashed) at over 360mph here. Three years later, American Craig Breedlove drove jet thrust car ‘Spirit of America’ to a speed of 407mph here. Of course, in August 1967, almost exactly 46 years before I first stood on the salt, a chap called Burt Munro set an under 1,000cc world speed record on his modified 1920 Indian motorcycle. All stirring stuff and images flashed through my mind as I drove the 5 miles across the salt to the main pits.

I found Henry waiting in the pre-stage area. That big smile greeted me once again as we shook hands and Henry introduced me to the team. The motorcycle he was about to ride for the very first time on the salt stood there looking magnificent. 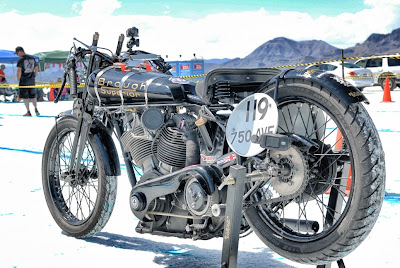 Driven by a need provide safe conditions in which to ride, the organisation of the running of the speed trials is very well organised, but it does take a considerable time while waiting your turn to run. For a first-time rider like Henry, the anticipation grows and I could tell he was eager to get his first run accomplished. The bike he was riding is a combination of parts from the original 1952 750cc Brough Superior and more modern additions. With plenty of time to think about what lay ahead, Henry went from his normal jovial self to periods of quiet thought. I wouldn't say he was nervous, but he was certainly full of anticipation of what would be a tremendously exciting thing to do. 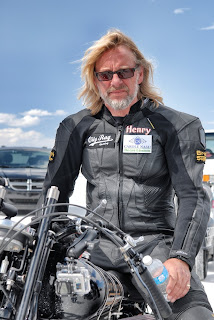 After a considerable period of time, during which racers flashed past on the nearby salt tracks, the time had come for the group of riders to move from the pre-stage assembly area out to the main start point. Henry donned his helmet and quickly rode away for his first ever ride on salt. The rest of the team, including mechanics, his film crew and this by now unofficial team photographer, jumped into the support vehicles and followed in Henry’s tracks a couple of miles to the start area. 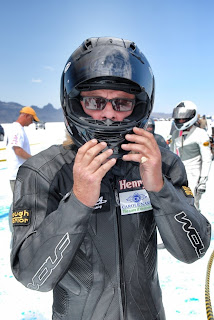 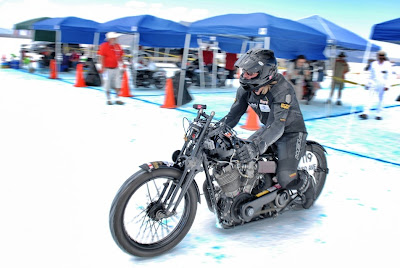 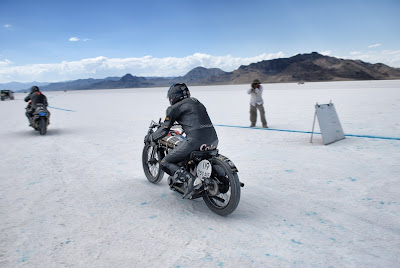 Bonneville Speedway has two parallel tracks. The shorter is the Mountain Course and is 5 miles long, comprising 2 miles for acceleration, the one measured speed mile and 2 miles for slowing down. The International Course is a total of 11 miles long, with 5 miles to accelerate, one measured speed mile and 4 miles to slow down. Henry was to run on the shorter Mountain course. Riders run in both directions and it is the average of the two runs that determines the overall speed. Henry was running in a brand new class for particular vintage machines (the class system seems very complex) and so was certain to set a new record time. The team were anticipating a speed of around 105mph for this first run.

Another longish wait ensued while other racers were on track, doing their out and return runs.

Anticipation levels grew as we waited in the surreal environment of the densely-packed salt pan. Keeping cool under the blazing sun is almost impossible. It soon became clear that there was a risk that Henry might not complete both of his runs before the course closed at 6pm. The delays between different groups of riders being out on the course, safety sweeps of the track to ensure no parts had fallen from machines running at speed, and the switching of track direction for return runs had all taken their time, and had taken their toll on the amount of available time left in the day. 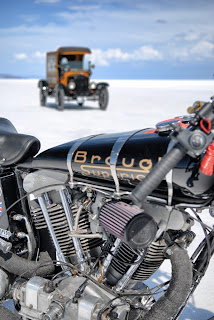 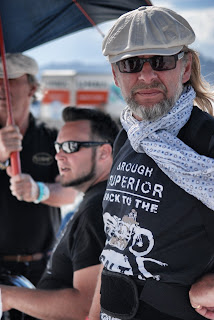 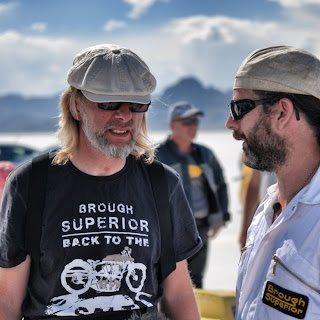 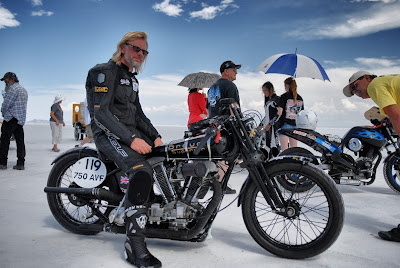 Finally, Henry was called forward and rode over to the start line. 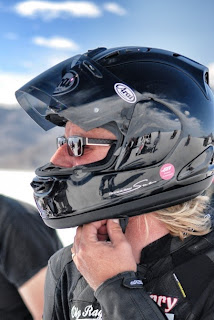 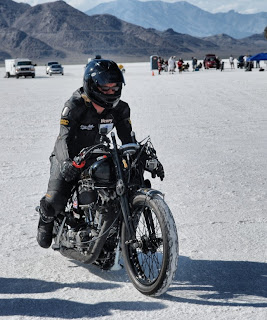 I don’t know what was going through Henry’s mind, but it must have been excitement mixed with some nerves. He was about to ride down one of the most famous speed tracks in the world on a vintage-class (and very expensive) motorcycle. Not only that, but he was being filmed doing so as well, so was under considerable pressure! 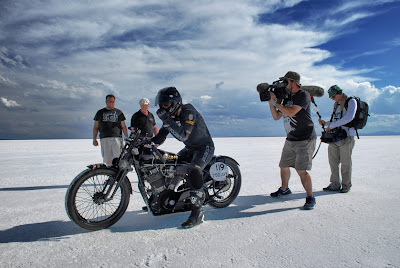 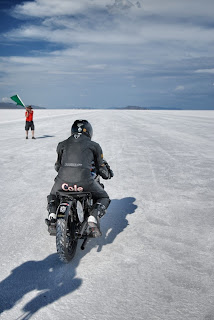 In a flash, that was it, Henry was gone. He set off across the salt with just a series of flags and a rev counter to guide him. We wouldn't know how he did for a few minutes until we drove back to the impound area where the riders gave to wait until their return run. Henry was there waiting for us, hands shaking as he described the run and how he felt. He had experienced a “tank-slapper” or speed wobble during that first run but being an experienced biker, he had slowly eased back on the throttle to regain control. His speed was 103.941 for the measured mile which was quite an accomplishment for a Bonneville first-timer. 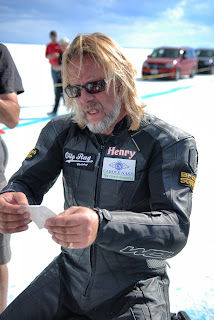 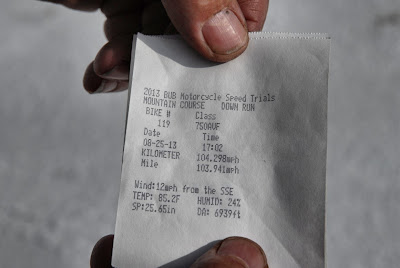 Just a few minutes later, Henry was instructed to ride down to the other end of the course again for his return run. 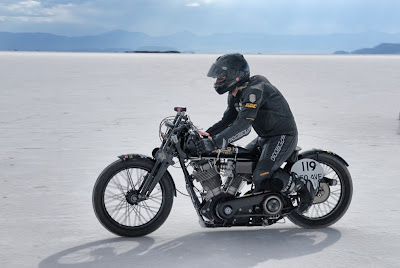 No doubt slightly shaken by the tank-slapper and needing to keep the motorcycle in good shape for later runs during the week, Henry ran a slightly slower speed on the return, resulting in an average speed of just under 100mph for both legs.

It was quite a day. I need to say thanks to the Brough Superior team, especially owner Mark Upham for letting me share on a memorable experience for my first day at the legendary Bonneville Salt Flats. Of course, congratulations must go to Henry, who is now a world speed record holder. How cool is that!
Posted by Gary France 43 comments:


I hope all my readers are well and that you have all been enjoying the summer.

I have been a little quiet on my blog recently. What with travelling, helping sons with work, riding across Europe a couple of times and generally being busy, that hasn't left much time for blogging.

There is one thing I have been working on for a while, and this will be announced soon. It is motorcycle related, but you will have to wait a few more weeks before an announcement is made.