Newspapers are there to make a profit, not to provide accurate news.


It is sometimes easy to forget that the primary aim of a newspaper is to make money. We tend to believe what we read most of the time, but a lot of caution is needed. Often, accurate reporting comes second to getting the paper produced and when the pressure is on to meet deadlines, if that means an article is not accurate, then it seems many newspapers don't really worry about that too much.

Of course, as readers, we only really discover this when we have first-hand knowledge of something and we are able to compare the true facts with what a newspaper says about it.

Take the Daily Mail reporting today that the Pope is selling his Harley-Davidson. 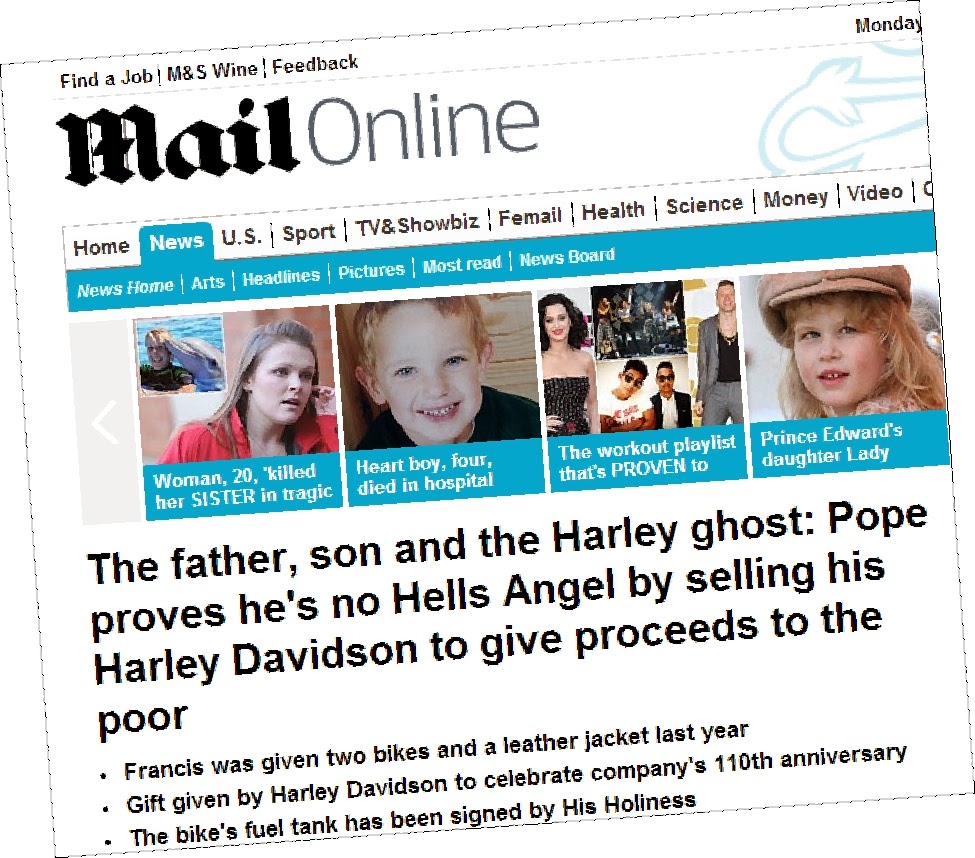 The headline alone is mis-leading. It links Harley-Davidson motorcycles to Hells Angels. "The father, son and the Harley ghost: Pope proves he's no Hells Angel by selling his Harley Davidson to give proceeds to the poor".

This link is somewhat unfair to most Harley-Davidson owners, as many that I know, who would not sell their own Harley-Davidson's, are most definitely not Hells Angels.

The reporter cannot even spell Harley-Davidson properly. Nor can he spell angels it seems. Further down in the piece, he spells it as "Hells Angles". Oh dear.

The caption underneath one of the pictures states "At the time the Pope laid his hands on a disabled Angel...." I happen to know the man pictured is not a Hells Angel, but a HOG member. Similarly, the article goes on to say "Four days after the gifts were given to him, Francis blessed a crowd of Hells Angle bikers in a congregation at an open air mass in St Peter's Square". Really? There were many thousands of HOG members there, but to suggest these were Hells Angles (sic) is somewhat ludicrous.

So, the reporter, Chris Pleasance, has some facts right, but has largely embellished the article with untrue references to Hells Angels to spice it up somewhat. Either that or he simply didn't check the facts. Whichever is the case, it is very shoddy reporting.

Sadly, this is not the first time I have experienced poor reporting of something I personally knew about. I would say that I have read about six or so articles about things I had good knowledge of.  In every case, I have read the newspaper reports and was amazed at how inaccurate they were.

Don't believe everything you read in the papers!
Posted by Gary France 9 comments: