The doorbell rang and the courier stood there, holding a shoe-box size package with my name on it. I knew what was inside.

I carefully opened the box and took out the contents. It was a wooden model of a scooter. Most people would not give it a second glance, but it meant a lot to me. This had been half-way around the world and held by many people who all had one thing in common. We all liked and respected the man this model had come to represent. That man was Bob, who also went by the name of BobScoot.

Like many, I first met Bob electronically, when he either found my own blog, or I found his. Soon, we starting reading each other’s writings and probably like many, I was drawn to not just what he wrote, but the way he wrote it. Bob poured his heart and soul into his blog. Interesting, funny, moving and always full of pictures both good and ordinary, his blog postings told us about the man, what he liked, how he felt, his travels, and of course the odd things peculiar to Bob, like his pink Crocs, plus his wish to nearly always include a picture of his feet.

Many people followed Bobs blog. He seemed to be at the centre of like-minded people who enjoyed writing about their motorcycle travels. He was the one person we all read about, as his words and pictures were eagerly read many around the world.

Bob often offered his help. I remember I was about to go on a long motorcycle trip and wanting to film and then edit some videos, then this near stranger called Bob who lived thousands of miles away in Canada, offered his advice which was very gratefully accepted. I think that was typical of the man – he helped anybody that he could. He certainly helped me on a few occasions.

Bob died nearly a year ago. It was sudden and a shock. No doubt it hit his family very hard as I think there was no clue he was ill. I remember hearing the news and sitting there numb, as a good friend had been taken from us. Bobs last post on his blog was very typical – on holiday with his wife Yvonne, he posted pictures and words about the two of them driving his Corvette around Kentucky. I really miss reading his posts.

I met Bob just once. When I rode around the USA I didn’t go near to Vancouver where Bob lived, but I regretted that and afterwards made a special trip, renting a bike in Seattle, and rode to his house. Bob and Yvonne were as kind as I had expected, showing me around, taking me to dinner, letting me stay at their house and genuinely wanting to spend some time with another road traveller. Bob did that a lot. I enjoyed reading about his meetings with other moto-bloggers all over America. Not only did Bob read others’ blogs, but he wanted to meet the people as well. What a thoroughly nice guy he was. I remember he laughed when I arrived in Vancouver wearing a copy of his trademark footwear – pink crocs. Bob and I walked around Vancouver both wearing our amusing pink crocs. I am not sure what people thought, but I can imagine!

So, in honour of the man by those that knew him, this model, appropriately called ScooterBob, has been travelling around the world and has been taken to various places to be photographed with and by the people that knew Bob. It is a terrific idea and I really enjoyed seeing the mementos that people have also placed in ScooterBob’s box.

It seemed obvious to me what picture I should include first on this posting – here I am with one of my bikes, wearing my pink crocs, of course…..

While I live near London in England, I took ScooterBob to St Tropez in France on a motorcycle trip as that seemed the right thing to do. We rode from London through France, Belgium, Luxembourg, Germany, Switzerland and back into France to reach the Mediterranean Sea. On the way, Sonja (who knew Bob as well as most as she also lived in Vancouver for a while) joined our group as we made our way through Germany. I had intended to post many pictures of ScooterBob in these countries, but as the title of the post says, sometimes, things don’t work out like you planned. Rather embarrassingly, I managed to accidently delete most of my photographs of the trip. Initially, I was horrified, but in hindsight, that is not a bad thing, as it has allowed me to concentrate on writing something about Bob and remember him, rather than show pictures of where ScooterBob was taken.

So, here are just a few pictures, that don’t do justice to the Bob who took such great pictures himself.

Bless you Bob, you are missed by many.

ScooterBob is now travelling once more, on his way to Shelia.
Posted by Gary France 11 comments:


I was very fortunate to be able to test-ride the new Harley-Davidson prototype electric motorcycle, called Project Livewire. Along with son Charlie, we had been invited to go to the Millbrook Proving Track to be one of the first to ride this bike in the UK.

First off, I have to say what an amazing experience it was riding this bike. It’s power and acceleration are amazing. 0-60mph on a motorcycle is pretty quick and the 300 volt battery certainly provides enough power to get you up to its restricted top speed of 91mph very quickly. The power is delivered very smoothly, with a constant rate of acceleration throughout the power range – it accelerates as quickly from 50-80 as is does from 20-50 mph – meaning you have to be prepared to hold on tight at any speed when you crank the throttle open.


The bike has no gears, no clutch, just a twist-and-go throttle that launches you surprisingly quickly. Of course, the bike is nearly silent, although Harley-Davidson have introduced some noise that is pretty reasonable at reminding you the motor is working hard. Having previously ridden somewhat odd completely silent electric motorcycles, this was a welcome addition. 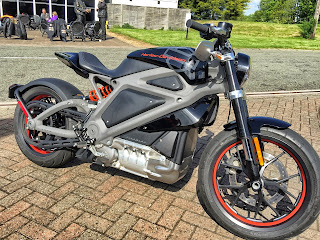 The bike weighs 210kg or 463lbs, but it feels light and agile. It handles well and can certainly be thrown into the bends. We rode the bike for about 15 minutes and in just that short amount of time, it was easy to feel at ease with its handling. We were glad it was a gloriously sunny day which enabled us to enjoy the dry track to the full. We first took the bikes over Millbrook's Alpine course with steep inclines and both positive and negative cambered fast bends, before unleashing its power on the 2 mile circular speed track, where it was easy to ride the bike at its top speed quickly. 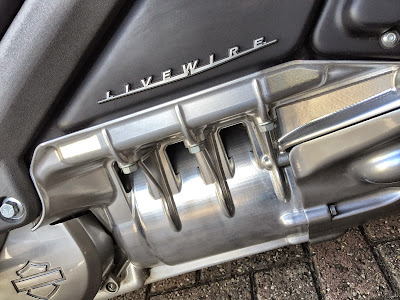 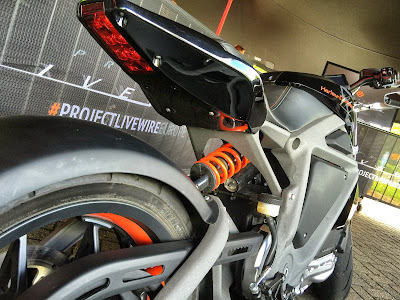 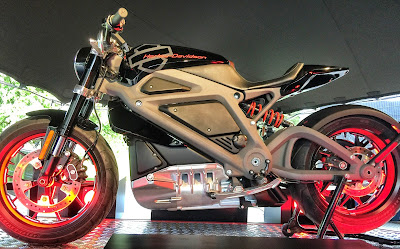 Range is the limiting issue with the bike at the moment. I am sure that Harley-Davidson will wait until the battery technology improves so that a 100+ mile range is possible before fully launching the motorcycle. That is, if they ever do. It is by no means certain that they will, but I for one would certainly be disappointed if they don’t.

Part of the purpose of the test-rides was for Harley-Davidson to solicit feedback on what riders thought of the bike and there was a good process in place to allow that to happen. Now, they wouldn't go to all that trouble if they were not going to take forward the manufacture an electric bike, would they? 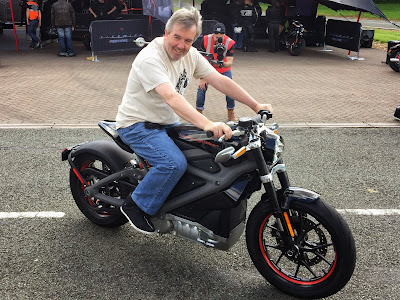 What a bike! Would I want one? Err, yes! I know many will say this is not like a traditional Harley-Davidson and they want to retain their petrol-engined bikes and I would want to do that as well. But, this bike is so special, it will attract a new type of rider and certainly some of those who would like both petrol and electric Harley-Davidson's in their garage.
Posted by Gary France 20 comments: