Seriously, does anyone think Google Glass is a good idea when driving a car?

Google Glass, which looks like a pair of glass frames with a tiny screen, can be used for browsing the web, reading emails or many other things normally used on computers or smart phones. These are now available here in the UK. 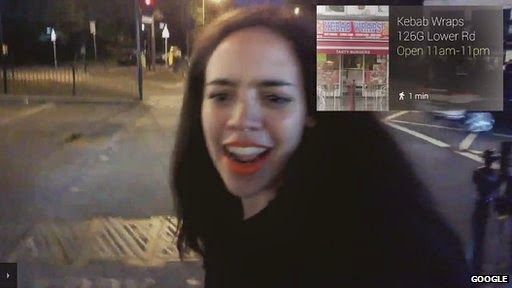 It has become clear today (BBC News website) that “The BBC has learned that the US firm held talks with the Department of Transport ahead of the launch. The DoT had previously raised concerns that the wearable tech could prove a distraction to drivers. That is still the case, but a government spokesman revealed that the search firm was investigating ways to allow drivers to legally use Glass while on UK roads- possibly by restricting the information it displays mid-journey.”

Really? Are drivers not already distracted enough? One thing is certain wearing of Google Glass when driving will not make our roads safer, it will make them much less safe. So why doesn’t the DoT immediately ban wearing these when driving? One can only put this down to yet another failure by the UK Government. That is not a political statement, it is just the truth. Successive Governments seem unable to demonstrate much common sense these days and that is truly worrying.

So if these were allowed, but say with the same restricted information that is allowed by a sat nav / GPS unit, just how will that ever be policed? Only the wearer can see what is being displayed, so nobody will ever be able to check whether the glasses are being used correctly. It is just plain dumb to even consider that people will follow the law and only use them in any restrictive mode.

Do something about this – write to your MP now and express your views! This is how you find out how to contact your MP.... http://www.parliament.uk/mps-lords-and-offices/mps/

If you are reading this from anywhere else in world, contact your government now!
Posted by Gary France 20 comments: