Biker get away to the sun?

Now is the time of year that most bikers in the northern hemisphere don’t like. The warm days of summer have passed, the grey and rain of autumn have made their unwelcome appearance. Getting out on our motorcycles just isn’t as much fun as it was in the summer. As a biker living in London, England, as yet another riding season draws to a close, it’s all pretty depressing to me.

There is only one thing for it – head south to the sun. For most people in Europe, you have to go a pretty long way south before the temperatures begin to climb, but in the US, that isn’t the case if you live in the more southerly states.

Take Texas for example. Motorcycle rallies are over for most of us, but not so in Galveston, Texas. The ‘Lone Star Rally’ runs from 1st until 4th November this year. Located on the Gulf of Mexico near Houston, Galveston is on the same latitude as... the Sahara Desert. The average daily high for Galveston on 1st November is 75F / 24C with the record high being 82F / 28C, and thats plenty warm enough for most of us. 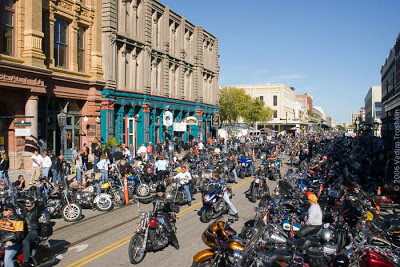 Claimed by the organisers to be the largest four-day rally in North America, this year’s event features concerts, a custom bike show, hundreds of vendors and even an appearance from Charlie Hunnam who plays ‘Jax’ in the TV series ‘Sons of Anarchy’.

Not able to attend this November, I am determined to go to the rally one year.

Here is the “official teaser video” from the rally organisers website....

If you do manage a autumn get away to the sun somewhere, have fun and post something about it!
Posted by Gary France 22 comments:

Don’t you just love inspirational videos?
This one is about a group of guys doing something as simple as riding motorcycles together.  It is very cool.

It makes me want to go out and ride.
Posted by Gary France 7 comments:

Five old men from Taiwan, average age 81, set out on their motorcycles for 13 days, for one simple reason – to achieve their dreams.

Dreaming is important.  Achieving those dreams more so.

I hope I can still ride a motorcycle with my friends when I am eighty-one years old.