Last week one of my son's and I rigged up a way of fixing my newly purchased GoPro camera to my red bike. Tomorrow, on the UK Mothers Day, I am taking part in a ride to honour British Soldiers and I want to take some video of the 10,000 motorbikes that have registered and are expected to attend.

My son and I created something that would work, but if I am honest, I didn’t entirely trust to be strong enough, so I decided to buy some RAM Mounts. Using some of bobscoots guidance, I contacted GPS City in Las Vegas and ordered some parts from there as I knew you couldn’t get RAM Mounts in the UK. I was hoping that these would arrive in time and sure enough, as I had paid $74 extra to get these shipped by priority air service, they arrived on Friday morning.

As usual, packages with gadgets in usually don’t take long to be opened in this household and just a few minutes later, I was looking at the four parts I had ordered.

I had selected two different sizes of U-Bolt fixing, so that these could be fixed to either the handlebars or the second were ordered specifically for my Road King, the crash bars. I have already fixed one of these to the red bike.... 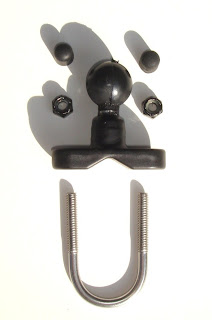 I had also ordered a short RAM Arm in chrome.

And finally I had ordered a small Camera Mount Mini Plate that connects the camera to the RAM Arm.... WAIT A MINUTE, WHAT IS THIS????.... 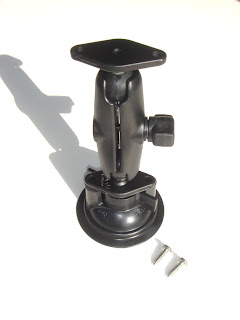 How DUMB is that? This is not a Camera Mount Mini Plate – either I ordered the wrong thing, or GPS City sent the wrong part. I checked the delivery note. I had ordered the correct part, but they had sent something completely different. Argh!! This being Friday, there was no time left to get the correct part shipped from Vegas in time for the ride on Sunday.

My wife suggested I should look for something else in the UK, but I knew it was useless. These parts are not sold in the UK, but I decided to try anyway. Sitting down in front of my laptop I started to search and what did I find within about 30 seconds – a supplier of Ram Mounts just 10 miles away from where I live!!! I know I should have listened to my wife! If GPS City were dumb for sending the wrong part, I was even DUMBER for paying a small fortune to get something delivered all that way when I could get it just down the road.

I gave Buybits a call and they were terrific, helping me select a part that would work (they didn’t have the exact part that I wanted) and it arrived in the mail at 9am the next day - on Saturday morning. Here is the camera base that was delivered.... 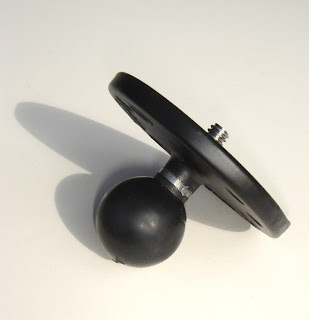 Here is the completed set up ready for my ride tomorrow.... 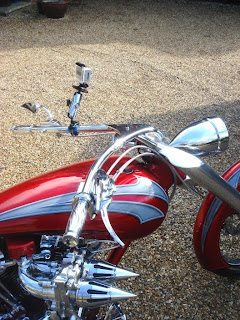 I hope it works tomorrow and in the next few days I will hopefully post some video of the event.

Even though the set-up is ready for tomorrow, I still feel dumber.
Posted by Gary France

I've had a ram mount on my bike for three years and it works great. Miss shipped parts are never a good thing and paying that kind of money to get them makes it even worse.

Looks like a good mounting solution. A shame you had to waste a bunch of money to get part of it.

Feeling dumb is verification that you are still able to learn something...I feel dumb every minute of every day...you would think by this time I would be a frickin' genius! pffftt....

I have also found that listening to the wifey helps keep me from feeling dumb-er.

Live happens bro! Savor the flavor! Thanks for keeping us from spending our clams uncecessarily

Great job of getting it set up. I hope you plan to post some of the pictures and/or video.

AHD and Chris - I used the RAM mount yesterday and it worked perfectly. I got pretty hot under the collar when the wrong part arrived, but I am over it now.... I took one of FLHX Dave's chill pills....

Dave - LOL. Another one chalked up to learning!

Oz - very shortly! Just as soon as I have uploaded it to YouTube (and that does take a loooonnngggg time).

glad it all worked out and you managed to get some video. When I had my GoProHD in the wind, it kept blowing the camera back (changing angles), I tried to really tighten the pivot screw but it wouldn't stay so I had to resort to the dash mount to keep it out of the wind. I may just leave it there.
I also took that suction mount and put it high on my car's windscreen with the GoProHD upside down. I want to get some idiot car drivers' videos.
Can't wait to see your video. You're retired aren't you . . so where is it ?

Bob - I looked at your epic long posting "Wet, Dry and Warm, Dark and Cold" and watched the video. I thought I saw the camera move and I wondered if you were trying to adjust it while riding. Now I realise it probably just became loose. I also saw your back to front and upside down videos from the car.

Have patience Bob! I went on the ride only yesterday, getting back at 6pm after 240 miles of riding my not-very-comfortable red bike. My back ached and I sat on the sofa, ate and then fell asleep. I edited the video this morning and I have spent the last 5 hours uploading it, with one hour to go. So yes, retired is right, but I am going as fast as I can.

By the way - I laughed out loud (literally) when I saw your Irondad style pose on your bike. I will look at that post again later as there is much to read in there.

I was just kidding. Take your time with the video. My 8 min videos are over 500 megs and it took me 2x to upload to Youtube. Problem with windows 7 I think. I had to fire up my XP machine to do the upload.

Those front to back and upside down videos were from the bike. I haven't edited the car ones yet. I think with the wide angle there is going to be a lot of hood in them.

I had the GoProHD on the RAM mount using a U-bolt from the right mirror stem so I would not get windscreen glare, but the W/S is in the video on the left side. I got tired of having to upright the camera everytime I went faster, so moved it back to the dash mount behind the W/S. Actually, the glare is not really that bad so I will just leave it there.

The last part of the video was taken after sunset and appears to have enough light to be satisfactory. I have more night video with more glare that I took last week with lots of lights and more glare, but perhaps it isn't that bad.

That post was my new technique. Instead of providing links for everyone to navigate away, I just posted the screen portions . . .