Paul has kindly offered to give me a rest from blog writing today, so this is a guest post by Paul.....

Day 9 on Thursday was a short day, partly because when we got to Bath we missed a turning to Popham Beach State Park, good old GPS / sat nav, and ended up at our evening destination at lunch time! We decided to check the place out having spotted a little cafe on the edge of the bridge that took us to the Bailey Island Motel. We had a fresh crab sandwich and mused about cancelling the accommodation because the place was remote and dead! We then spotted Cooks Lobster House Restaurant. We asked if it was any good and the girl at the cafe said it was dreadful, mmm local politics maybe, so we went to check it out ourselves, had a beer, staff were friendly and the menu looked fine. So at 2pm we checked in to our motel after all and could see that it was a short walk across the beach back to Cooks for supper..

Gary had a lot to catch up on for the blog and I was knackered after a poor night’s sleep. I had woken the night before very cold as the temperatures had dropped. We have noticed that come 4pm by the coast the temperature can really become quite cold. So Gary updated the blog and I slept! Come 7pm we headed off the Cooks. Had a great meal “surf and turf” which was steak and 4 lobster tails and yes, I left a lobster tail!!! I had had enough lobster.

Bailey Island Motel was actually better than we had thought when we arrived. Nice welcome from Connie, the situation was idyllic and Cooks was a busy and fun place, well up until about 9pm when we were as seemed to be the norm in Maine the last people standing. 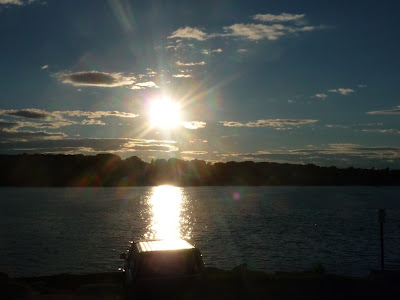 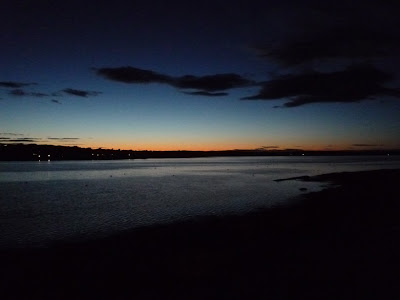 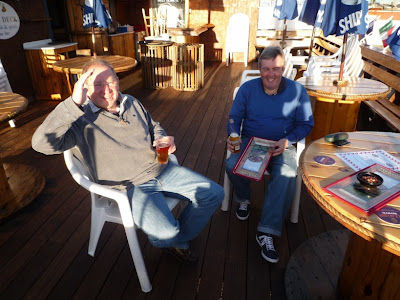 The next morning we had full view of the bridge which was being re-furbished, fascinating as it was a honeycomb of rocks which allowed the sea to flow as the tides changed. We ate breakfast overlooking the bay in warm sunshine, a blueberry muffin and a coffee. So overall if you want peace and tranquillity and one restaurant then Bailey Island not a bad place to visit after all. 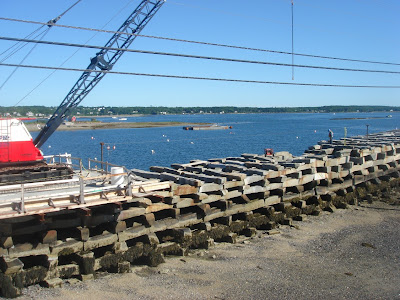 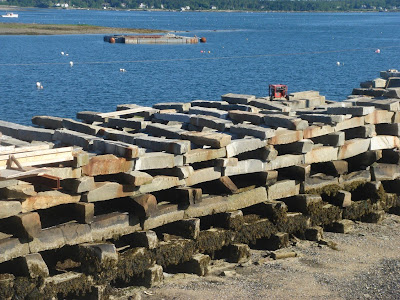 Today, Friday was a big day for me. We were going to meet Frank and Margaret McDonald. Beforehand we went to Portland to a locksmith called Lock, Stock and Barrel!, to see if they could release the wrong key from the wrong lock from Gary’s bike. They could!! But alas the key and lock are now useless!

Frank McDonald was at Cambridge with my father and since my Father’s stroke about 7 years ago, I had been corresponding with Frank but in all these years had never met him. I always remembered my father talking about Frank but they had lost contact. I joined a big computer reseller about 15, or maybe longer years, ago. Our IBM account manger was a guy called Neil McDonald. To cut a long story short we used the IBM global email network to track Frank down as I know he worked for IBM. This was in the days when no-one had private email so quite a cool thing to be able to do. Frank and Dad got back in touch and Dad visited the McDonalds in Portsmouth Maine on several occasions and finally I got to meet Frank too!! How cool is that. We had a great meeting and lunch and talked about Dad and Frank’s time at Cambridge in 1946 and saw the picture of the May Ball in I think 1947 and could see Frank and Dad. There is still a story that I haven’t quite got to the bottom of but it involves women, a drainpipe and Gonville and Caius College one late evening. It was mentioned in passing but the truth alas I think will never come out. We took some pictures and when in next visit Dad in Tenby in a few weeks time I will be able to share the visit and the pictures. A great privilege to finally meet Frank and I think Gary and I added some street cred for them as we rode off on our bikes and waved at the neighbours!! Frank keep those email jokes coming! And thank you Gary for allowing me to indulge myself. 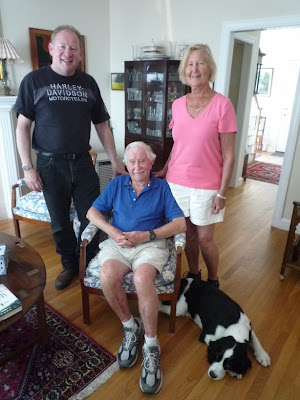 We arrived about 7pm local time in Portsmouth, a little further and slower journey than anticipated south on Route but rush hour and public holiday weekend maybe not surprising!. Portsmouth New Hampshire in the 17th century was known as Strawberry Bank and is an old trading hub for this part of the US. We booked in to the Strawberry Inn Guest House, not the warmest welcome we have had so far. The guest house is a little run down but never the less comfortable and we could walk on to town. This was a pre-requisite. Portsmouth is a lively cool town and was full of people out and ready for the 4th July celebrations.. We walked in to town, dinner in an Italian (no more lobster thanks!) and a couple of beers, one of which was in an Irish Bar. For those of you that don’t know I think that the Boston USA area does the best Guinness outside of Ireland and the Toucan in Soho Square London and it was also pretty good in Portsmouth tonight. A good place to stay and visit. 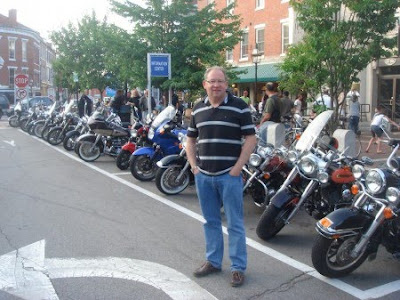 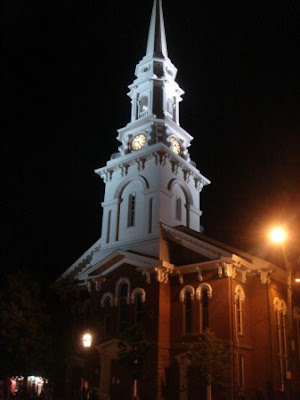 This has been a great road trip and Gary, thank you for letting me join you and the work you have done planning the route. There is no doubt that a motor bike is a great way to explore a country.

So off to Boston and to prepare to re-claim this great country for England!
Posted by Gary France

Oh, to have had to much lobster. What a problem to have :)

Great guest post Paul. Looks like you fellas are having a great time, but too much lobster? I'm looking forward to getting to Maine and having that problem.

Paul, what a nice reunion tale. I am glad for you that it became part of Gary's road trip. It's about a man, the road and his bike, but it's also about the people one meets. Great story.

too much lobster?!..never! ;) fabulous day again!! and great guest post! keep riding and writing gentlemen, im riding vicariously thru you :)

The more I read about your trip the more envious I become. Sounds like you're enjoying it to the max!

Thanks for all your comments. We have had a blast so far and I what a finale for me, great 4th July party and P Town!!

Hi Paul.
I'm catching up while on vacation in northern NY. I agree with motoroz...one can not have too much lobster! Glad you finally got to meet Frank and his family. Now I'm off to check out more of the adventure. Love the photo of the church at night...oh and all those bikes!