My son gets a cool bike


My eldest son, Charles (or Charlie as he likes to be called) used to ride small motorbikes, but as he never took his motorcycle test, these were limited in size to under 125cc. He stopped riding them a few years ago and has recently shown a revived new interest in bikes.

I recently told him that it would be good if he could come on some rides with me, but this would mean having to take his bike test in order to get a decent sized bike. I made him the rather rash promise that if he took and passed his test, he could ride to Portugal with a few of us next year. He said he would and so far has completed two of the four required parts of the test....

He is hoping to take both of the practical riding tests by the end of next week.  That will then see him getting a full bike licence and he will then be able to ride any bike.

However, the imminent passing of his motorcycle test presented me with a problem. If Charlie was to ride to Portugal next year, what bike would he ride? Was I prepared to let him take one of my bikes? Hmmn. Maybe. Maybe not. We are of course talking either of my precious Leading Ladies, or gulp, my red custom bike, Tradewinds.

We could rent a bike, but most rental companies require you to be at least 25 years old and have been riding for at least 12 months. Hmmmn. He would meet neither of these requirements.

The third and most likely option was to buy him a bike. That would also prevent him from needing to ask to borrow one of mine. So, I started looking and found a perfect bike for him. A neat looking, customised bobber with a fair degree of style at a reasonable price. A saw it on the Facebook page of a Michael Noble, who runs the customisation side of Guildford Harley-Davidson.  He wasn’t selling it himself, but a friend of his was, but when I called the next day, the bike had been sold just 30 minutes earlier.

Disappointed in missing such a perfect bike for Charlie, two days later I looked on e-Bay and found the very same bike for sale. A dealer had bought it and was re-selling it. I went to see them straight away and after test-riding it, I bought the bike. So, my son is now the proud owner of a very nice Bobber.... As you can see from the first picture, he looks great sitting on the bike and it suits him very well..... 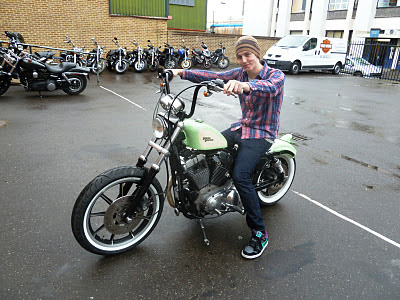 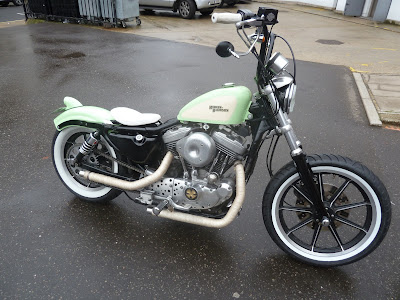 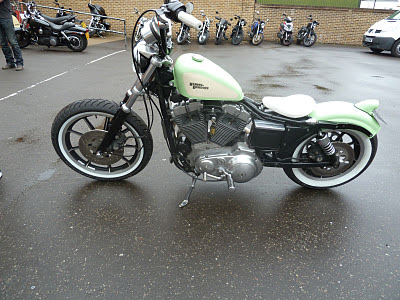 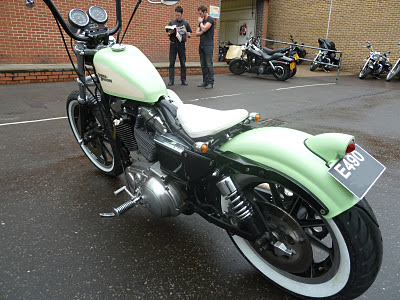 It is a Harley-Davidson Sportster XLH1200 BOBBER 1200cc, from 1988 (the same year Charlie was born) that has done just 24000 miles. It is green and white and is tastefully Bobbed in traditional 60/70's style, with new whitewalls, new rear shocks, a new battery, new paintwork, keystone bars, a white solo seat and grips, wrapped pipes and is very clean in great condition for a 24 years old bike.  I could only spot a couple of small, easiy fixed problems.

All he has to do now is pass his bike test! If he doesn’t pass, I will keep the bike for myself !!

Cool bike, looks like a brother of my Sporty, which will have customized a bit next year...

I keep my fingers crossed that Charlie passes the test... (if not, you have a sweet spare bike for guests...).

Sonja – Of course, I really want him to pass, but if he doesn’t, I will just have to ride the bike myself.... Or, as you say, any visitors. I would though let him come and sit on it every now and then!

This is GREAT Gary! Funny, my daughter got her first motorcycle at that same age! Here is the post I did on her test http://sunnysideup-eve.blogspot.com/2008/06/she-passed.html
I wish your son good luck on his test. Can't wait to hear more about your adventures together! Hey!! I think I see my bike in some of those photos....all the way to the right!

you always favoured my brother Charlie more than me ! You never bought me anything, and now Charlie has a bike and I don't. Other dads don't play favourites. Wait until Mom hears about this . . .

Eve – She looked very smart in her pink motorbike jacket when she took her test! I am sure Charlie will pass, as he is a very practical guy, then riding with him will be great fun.

Bob – I told you when you were growing up that you would only reap the benefits of a fruitful life if you studied hard and did well at school. Your Mom will agree with me that together we gave you every chance.

Pretty sweet looking bike, he looks right at home on it. My hands would fall asleep within minutes due to the bar height, but people love them that way.

Good luck to Charlie on passing his test. If he is like his dad, I'm sure he'll ace it.

Trobairitz – I am a shorter than my son and the bars were a little high for me, but they seemed to suit him quite well. After what you said about his Dad, he had better pass it. LOL.

I think Sonja has the right idea, so add me to the pool of adoption candidates please. : )

Such a good Dad or were you protecting your motorcycles from the perils of newbie riders? : )

That is a pretty cool looking bike, I like the color and the whitewalls, nicely done. You were certainly lucky to find it the second time, when most bikes are sold you never find them for sale again.

Best of luck to Charlie- that's a sweet ride

Troubadour – If you think of a white and light green bike, that doesn’t sound too attractive, but it actually works well. I agree, we were very lucky to find it again.

No Name – Thanks. I am sure he will do well.

Congratulations to Charlie!! That is one sweet looking ride! I can't wait for you to post more of him getting to know his new baby. Maybe he'll start blogging as a newbie to two wheels.

Another milestone. That is a great looking Sporty.

Congrats to charlie. Hope he passes.

A guest bike is a nice idea too. When can we come visit?? ;)

Lady R - I am not sure that Charlie has the time to do his own blog, but I will try to keep you up to date with his initial biking exploits!

Webster - it is a great looking Sporty and to tell you the truth, I am a little jealous!

Chris - You can visit whenever you want and let's not tell Charlie you want to ride his bike!

Apart from the occasional Triumph, Harleys seem to be the only bikes which have high bars. Would they be changed for a Portugal run? I had high bars on my Tiger 100 when I was a young fella and used to get pretty fatigued on a run.

Geoff – I have also seen the occasional chopped Honda or Yamaha with high bars, but they are as rare as a virgin in a brothel. I am not sure about lowering them for Portugal or other long runs, as I guess we will wait and see how he gets on with them first. Changing them would be really easy for Charlie as he is a super mechanic, willing to tackle just about anything.

I fully appreciate your desire to buy the right cool bike for Charlie. I have bought my wife a couple of "perfect for her bikes"...and I enjoyed the hell out of riding them for her!

Radar – Good one! I will have to remember that when I but my next bike. Oops, sorry, I mean when I buy my wife a “perfect bike”.

That is a very cool bike and should be perfect for someone like your son. That is something he'll want to hold on to for ever. Great job Dad!

Jarred - I hope you are right and he does keep it for a long time.

Very cool bike!
Kind of reminds me of my son, that youthful style that kids go for these days, paired with a classic bike. He looks pretty pleased. Good luck to him on his tests!

bluekat – I agree with you, it’s a good combination.

Thats a sweet looking bike he has there. I got my first on the road bike after doing the direct access when I was 21. I bought myself a ZRX1100 the day after my 22nd birthday. I loved that bike. I would love to have a harley as a second bike, maybe I'll replace my C90 with one eventuall!
Nice blog to by the way.

Mike – He is chuffed to bits with it. Problem is though, he hasn’t yet taken his test and that keeps getting put back by events. On the way to take his module 1, somebody else fell off her motorbike and broke her finger. Then just before he was about to do the next stage again, he got knocked off his pushbike and dislocated his finger. That got strapped up and he couldn’t operate the clutch. Oh how I miss my C90, my first ever bike!