Concrete Jungle Where Dreams Are Made Of....

Happy Days! I made it to New York City (with thanks to Alicia Keys for the snappy one-liner above).

I landed mid-afternoon yesterday and found the hotel in Brooklyn that will be my base for a few days. The trouble with flying from east to west is the time difference hits you hard. After travelling for a long time, by the time I had unpacked a few things, went for a walk and had something to eat it was 8pm in NYC, but my body was still working on UK time, so for me it was 1am and I was bushed. I stayed awake for as long as I could fighting the sleep Ninja’s, but they finally got me at around 10pm.

It is now early afternoon on Wednesday and later on I will go and collect my bike from the airport. There was a much more pressing matter this morning and that was to find somewhere to watch England play Slovenia in the World Cup from South Africa. At the same time the USA were playing Algeria. I found O’Keefes bar in Brooklyn to watch the games which both England and the USA won to qualify for the knockout stage. Both were tense matches with the USA scoring with just minutes to go. This started about 5 mins of the USA, USA, USA... chant – all very patriotic and exciting stuff and a great way to spend a morning in New York!

Here is a picture from the bar....happy Americans..... 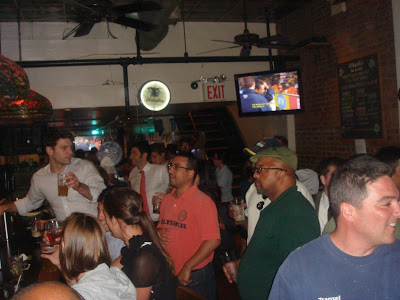 It finally started, your trip and the World Cup.
All the best, safe ride, I will follow you
Axel

does the air smell any different ? is the ground more solid ? Welcome to North America (again) good idea to have a day of orientation before heading out on the open road. May it never rain on your tour . . .

I've only been to NYC once Gary...I loved every minute of it. I went to Manhattan. Going to the top of the Empire State Building at night is a wonderful experience. I was wondering if you are on this journey by yourself? I'm really looking forward to your posts! Good luck. Hope you get used to the time change....quickly!

I was watching the last part of the USA game on the internet at the office when the feed suddenly crapped out with about 9 minutes to go. I frantically searched around and found another feed just in time to see the USA score the goal that won the game.
Congrats to the Brits and the Yanks for moving on to the next round, what we would call, if we were talking college basketball, as the "Sweet Sixteen"
Thanks for taking care of Slovenia for us. It was fun because both the USA and England had to win to advance, and they did. Lots of drama and that is what makes sports so fun at times.

Really looking forward to hearing about your trip. Here's hoping that the weather will be excellent for you and the trip far exceeds all your expectations of what you want it to be. A lot of us will be living out some of our own fantasies vicariously as we read about your trip.

Let me be the first to welcome you to the USA!Hope you have a very exciting time here.

Really looking forward to all your updates Gary.

I suspect that with respect to the World Cup, you'll ultimately be glad to be out of the UK for a while :-)

Welcome aboard. Get some rest, gas up the bike and have a blast.

Glad to hear you arrived safely Gary. Have a Bud for us. How do England do it: make you nervous and excited at the same time? They finally strung some passes together for sure, but should have scored 3 or 4 by the end - still no killer instinct around the goal mouth. Sunday will be the acid test of course: Eng vs Germany. "They think it's all over......."

Axel – Yes, the trip finally started and it feels good to be here!

Eve – It is a terrific city that I am lucky enough to have been to a few times. Some of the time other people will be with me, sometimes I will be on my own, which is how I wanted it. On Friday I meet up with a friend who lives very near to me in the UK and we will ride together for about 10 days. In about 2 weeks, my wife joins me for a week through Vermont. Later, I ride with others on the tour.

Bob – Actually it smells the same, just hotter! Who ordered these 90 degree temperatures to welcome me? Was it you Bob? Thanks for your welcome and yes, I have two days here in New York for orientation. Later today I am going to simply ride around the city and will probably make a video....

Jim – Lots of drama is right! I was sitting at the bar watching 2 screens at the same time. Trying to keep up with both the USA and England games was a challenge at times, especially as the commentary was on for the US game only. The place was having a quiet moment when England scored – I did something very un-British and jumped up, punching the air, shouting something quite loudly. I was the only person in the place supporting England, but I didn’t care about making my feelings known! I did care however as the commentator later said that the USA might go out because England were winning. Despite not being American, I did cheer when the US scored! So far, the weather is too hot.... how do you turn the temperature down....oh yes, ride north towards Canada!

BB – Thanks for your welcome! It is great to be here!

Geoff – Naw, we are getting better as each game goes by (ok, I am kidding myself). As long as I can see the England games, I don’t care where I watch them.

Willy – Thanks. Done two of them already. I am looking forward to the third!

Tim – Great result and it watch very pleasing to see England playing much better. As usual though, they don’t make it easy for us. I was really worried that Slovenia would score an equaliser and that would have been us gone! Germany will be different however, mind you, they haven’t been playing well either. It only gets tougher from here so I hope we can make it last. Fingers crossed. Already planning where we might watch the Germany game.