We went to lay a wreath

Each year on Remembrance Sunday, the H-D dealer I use, Warr’s, organises a ride out to honour the war dead.

I had never been before, so I thought it about time I did.

That was last Sunday and we were blessed with a warm and sunny autumn day.  About 35 bikes had arrived at Warr’s for the ride.  As usual with most H-D ride outs, there was the obligatory pre-ride safety briefing beforehand and unlike the last ride out, I was there in plenty of time to get a cup of coffee and to listen to the briefing before we left.

If you have never been on a H-D ride out before, it is an impressive sight.  By some standards, this was not a large gathering, but 35 Harley-Davidsons riding along any road is an impressive sight and it turns many heads. Lead by Scottie, we rumbled through the busy roads of south-west London and some waved to about the same number of scooters heading in the other direction as they rode into the capital for what was probably a scooter meeting of some sort.  The familiar smell of two-stroke engine exhaust wafted through the air, reminding some of us of our earlier riding years.

Soon, we reached the leafy scenic lanes of Surrey and encountered some slippery steep downhill roads that needed more attention than usual.  I was riding three bikes back behind a guy I didn’t recognise and he was being more careful than most as he made his way through the twisting winding roads and his slightly slower pace meant we were falling back from the main group a little, not that this mattered.  It wasn’t until later I discovered he had only taken his bike test three weeks earlier and this was one of his first long-ish rides, so my full admiration goes to him! 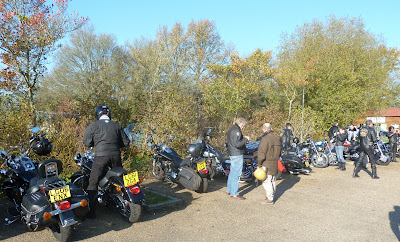 We stopped for a break and a coffee at a place called Forest Green and re-assembled for the traditional two minutes of silence at exactly 11am to remember those that gave the ultimate sacrifice for their fellow countrymen.  We bowed our heads and stood still as a mark of respect of those soldiers from around the world that fought on behalf of others.

11am is the time chosen in many parts of the world to remember the war dead as it was the "eleventh hour of the eleventh day of the eleventh month" of 1918 that the Armistice signed between the Allies and Germany at Compiègne in France,  took effect to formally cease the hostilities of World War I.  Remembrance Sunday has of course gone on to remember the war dead from all wars, not only WWI.

The ride continued to Elstead where there is a small war memorial and we laid a wreath.  Our group of 35 or so were from many different nationalities as so it was appropriate that a few words were said that we should remember the dead from all countries. 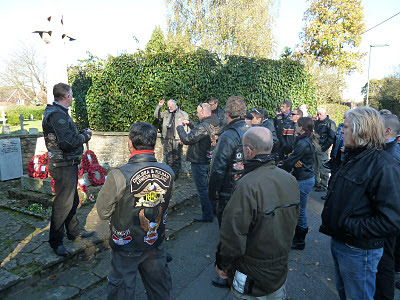 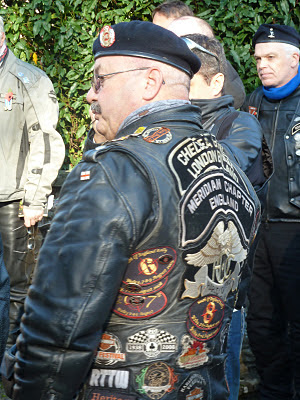 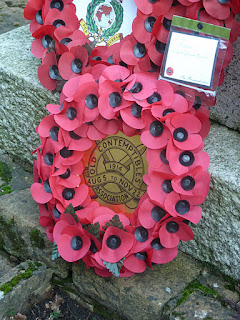 Nearby is the Mill at Elstead, a pub and restaurant , where we stopped for lunch of roast beef and Yorkshire pudding. Marvelous!

Wikipedia tells me that Elstead Mill, was occupied by Oliver Cromwell’s ‘roundhead’ army during the English Civil War of 1642-1651, but subsequently burnt down. The present structure is therefore thought to date back to the 17th century.  The river flows through the mill at can be seen from inside the building. 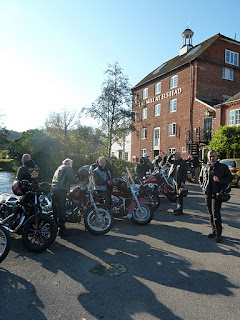 We broke up as a group and made our own way back from there and as I rode, I thought about what a good day it had been.  I promised myself I would go on the same Warr’s ride next year.  After arriving home, it didn’t take me long to fall asleep on the sofa....
Posted by Gary France

The post and photos show a great day of riding and honoring. It is great seeing others in all parts of the world taking time to remember and honor the brave men and women who have defended freedom.

Oz – It was a great day. You may be surprised to see just how alike our two countries are. I suspect that places like Australia and New Zealand mark Remembrance day as well, but I am not sure. Maybe one of my southern hemisphere friends can enlighten us.

A somber occasion as it should be, but a good excuse for a ride nonetheless.

I am glad you had a nice sunny day for the ride.

This is a great thing. We too as you know do this also. Respect. And if you can not only shake a hand by a Serviceman or a Vet. lunch sometime. veri word: "blesses" Ain't that something!

Looks like a great ride, Gary, and for a good reason. (Though I can't think of many bad reasons to ride.) All the same, good for you for remembering, and getting out there to show it.

I'm also all for your new blog name. I had wondered if you would ever change it.

Interesting that you have a Remembrance Sunday: We honour our war dead on November 11, regardless of the day of the week. I usually make it to our local cenotaph or the national monument in Ottawa for what has always been a very moving and sombre experience. But being November 11 it's usually freezing or colder, and frequently raining or snowing, so a ride is out of the question. Unfortunately we were travelling this year and unable to attend, although a group of Canadians on our ship did manage to get the Captain to make an announcement at 11:00 AM on the 11th - good for them. And good on you and your mates from Warr's for marking this day in a very unique way.

Trobairitz – Yes, a thoughtful day and the ride was a good one on a fine day. I’d like to think I would have still gone if the weather had been foul.

Webster – It is important to remember the past and to give thanks to those in the military that have lost so much for us, be that their lives or limbs.

Brady – Getting out there was important to me. I will go every year that I can in the future. Renaming the blog was important as the name was good when on my USA tour, but so much of my riding is now in other places that it didn’t make much sense to retain it.

Canajun – You spotted that well. The official recognition here in the UK of the end of the first World War is always on 11th November. This is known as Armistice Day and is not a public holiday. There are normally small ceremonies to mark this day because nearly everyone is at work. Honouring the war dead and injured mainly takes place on the following Sunday, which is known as Remembrance Sunday. It would be better if we had a regime more like Veterans Day whereby the public have a day holiday to honour the military.